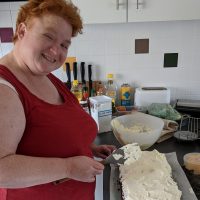 Headway Gippsland participant Susan Daniells has weekly cooking lessons, which she says are making her feel healthier and proud of her new skills.

In 2015, Susan noticed she was losing her eyesight and by August 2018, she had the first of 15 operations over about eight months.

She had only recently moved to Victoria from Queensland when doctors detected a build-up of fluid in her brain, known as hydrocephalus, which caused her vision loss.

Susan said it was a hard and difficult time.

“My family is in Queensland so I wasn’t getting visitors much and I was in out and out of hospital and that was difficult. I spent Christmas in hospital,” Susan said.

Today Susan experiences severe headaches and is completely blind in her left eye and 50 per cent blind in her right – she describes it as only being able to read the top line of an eyesight chart.

Before Susan joined Headway, she said she was doing very little from day-to-day.

“I wasn’t socialising much,” she said.

“I needed to learn how to cook because I wasn’t eating well at all, my diet was not healthy and I wasn’t looking after myself.”

Learning to cook became a goal in her NDIS plan, which Headway’s Joanne Watt has been helping her to achieve now for more than a year.

“Before I started with the cooking lessons, I was eating basically frozen sausage rolls and pies – that was my diet,” Susan said.

When her sister Annette bought her a slow cooker as a gift, things really started to turn around.

“It was the best thing ever because it meant we could do a big lot of curried sausages and get three takeaway containers of it and put it in the freezer for later in the week,” she said.

Susan has boiled up stews and soups in her slow cooker and even baked an array of desserts including apple pies and chocolate brownies.

She now has a folder of recipes typed up by Joanne in large letters – now a very thick book – she can refer to and prepare meals on her own, in her own time.

Joanne said since learning to cook, Susan was eating more nutritious and fresh foods and she had the satisfaction of cooking meals herself.

“She has been applying things she’s seen on cooking shows,” Joanne said.

“I enjoy cooking with Susan because she is motivated to improve her health and really keen to learn and practise new skills.

“Eating good food made from fresh ingredients is a great way to improve your health and nutrition – and cooking is fun.”

A highlight for Susan was learning to bake a Black Forest cake, a notoriously tricky dessert.

“When we pulled the [first] cake out of the oven it was more like a biscuit than a cake. Yeah, so it wasn’t so good,” Susan said.

Several weeks later they gave it another go using a different recipe and found success.

But for Susan it was about more than simply the enjoyment of making and eating a delicious cake. It meant she now had a recipe up her sleeve she could turn to for special occasions.

“I’ve made it for a birthday party and for Christmas.”

Now Susan and Joanne are taking their cooking up a notch since Susan received an air fryer from her sister for Christmas.

First up were garlic prawns and turmeric fish burgers.

Outside the kitchen, Susan keeps busy with Headway social support groups, getting out into the community every second Saturday and swimming once or twice a week.