Robert reflects on a loved career 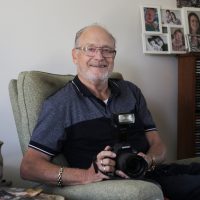 Robert Thatcher, a Headway Gippsland participant, is searching for the charging mechanism for his DSLR camera battery.

Once it’s back in action, it will mark the return to using the instrument he spent his entire working life in devotion to.

At 16, he left school to a job as a cadet newspaper photographer in Bairnsdale, spending his first two working years in the dark room processing black-and-white 120 film before he was able to get out on jobs.

“The police used to often come and pick me up and take me to a scene,” Robert said.

“I saw some pretty gruesome stuff and I grew up very quickly understanding life and death.”

His work introduced him to his future wife – Suzanne worked at the local camera shop – and they soon opened their own store in Traralgon where their kids Joanne and Catherine would play out the back.

When Kodak took over the store, Robert left for Ted’s Cameras, which offered him a role as an area manager in charge of eight suburban stores.

“Staff tend to get blind with their own store …  you’ve been looking at it for so long you don’t see something out of place.

“I was taught to look beyond just looking, if that makes sense. My mum used to have a saying: ‘Robert, open your eyes’.”

Robert said he loved the role but it was also at this time his staff noticed a change in him.

He described one of the “bigger mistakes” he made at work was revisiting a store he had just been to, thinking he was at his second store for the day.

“They said, ‘oh, Robert you’re back again, did you forget something?’ he said.

“I don’t remember doing this but I used to wander around the car park looking for my car because I’d go looking for it where I parked it previously.”

About 10 years ago, doctors diagnosed Robert with a brain injury, which was causing his short-term memory loss.

“They believe I was bitten by a mosquito, carrying the encephalitis virus and my set of circumstances was so unique or not known that I actually got written up in an Australian medical journal,” he said.

“My doctors said ‘you will sleep a lot because that’s your brain trying to repair itself’.”

Fortunately, Robert’s condition improved. The degree to which his symptoms improved contributed to the “unique circumstances” of his case.

“I’ll never get back to what I was but I’ve learnt to manage, control and be happy with what I’ve got,” he said.

“I love music, I love watching sport, I love chatting. My neighbour across the road comes across nearly every day and we sit out the front and have a coffee.

“I’ve accepted my new set of circumstances and I’m very happy within the new me and I also realise there are a lot of people worse off than I am.”

Today he describes his ABI as like having so much on his mind he can’t think.

“It’s important not to put things off because I won’t remember to do them,” Robert said.

“If I have a lot on my mind at once, it causes confusion and I can’t prioritise.”

He places post-it notes on the floor as a way to ensure he does not forget things.

“When people come in, they go to pick up the notes off the floor and I say ‘no, that’s my memory,” he said.

Today, Robert lives in Traralgon as a grandfather of five and attends Headway’s social support groups.