Michael is an artist living with epilepsy. He avoids flashing lights but looks to the stars 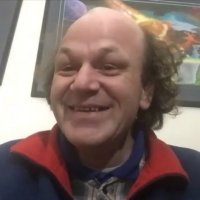 Warragul artist Michael Jones jokes he is fascinated by space because of the “crater” in his head.

The cosmos has become a major theme of his pastel artworks, where stunning neon planets orbit through kaleidoscopic skies.

What puzzles Michael today, is his belief his drawing improved after a “decent chunk” of the right side of his brain was removed.

“It doesn’t make any sense, because the right side of the brain is where creativity is,” Michael said.

At nine years old, doctors found a tumour in Michael’s brain they believe he was born with.

They were unable to remove the tumour itself, but cleaned up “dead bits” and inserted a shunt.

After another nine years, Michael’s eyesight was fading, to the point he could see nothing at all for about a week.

He went in for more brain surgery, and his sight returned.

“Now I have a distance of about six feet before everything goes horribly wrong,” he said.

He also developed epilepsy for the first time.

“That completely threw a spanner in the works,” he said.

Michael has to be very vigilant walking around town, and knows the safest routes. For example, he might have to take a detour around the arcade because of the flashing lights in a shop.

He can mitigate risk to an extent. But sometimes the triggers are unpredictable, like a sudden power outage or a flickering fluorescent light.

“I had a seizure in front of the pizza man,” Michael said.

The delivery man had an automatic locking mechanism on his car, which meant his car lights flashed as he met Michael at his front door.

“Christmas is absolute torture, there’s lots of Christmas lights in every shop,” he said.

“I’ve had a seizure in almost every shop I’ve been in.”

While seizures are common for Michael, it does not make the experience any easier for him.

“I had a seizure in the supermarket last year and because of the whole COVID thing, no one wanted to get anywhere near me.”

While Michael understands not everyone can stop and help him, he says the best assistance people can give him, is just waiting by his side until the seizure is over.

“Just show that you’re a human being and help the person that’s on the ground. They shouldn’t be on the ground, they should be up walking like you,” he said.

His support worker, Jade Downey, is there to help him with everyday tasks like going to the supermarket.

Jade is also there to support Michael in his artistic goals – the pair designed their own art gallery tour when an open studios weekend was cancelled due to COVID.

“Jade is awesome … The coolest thing about Jade is she’s really funny,” he said.

“I don’t really care what we do. If we have to sit and twiddle our thumbs for ten thousand hours then we better be laughing while we’re doing it.”